Whether it be during games, doing schoolwork or watching a movie, no one likes getting disturbed during that time or being faced with a slow connection and having to deal with lag.

Lag can be simply defined as a delay between an action and reaction, usually from the user and server respectively.

In Discord, this usually manifests with having your audio getting choppy and delayed which can eventually lead to Discord green but no sound-related problems.

I notice this when my internet is particularly bad for the day and my friends start speaking in robotic voices or the other way around.

Lag spikes in Discord can be identified and addressed in numerous ways using Discord and your system’s configuration.

Check Internet Speed from your ISP

If you want to check your general internet connection speed then speedtest by Ookla is a reliable site I recommend.

It is straightforward and shows statistical data regarding your Internet.

The ping here refers to your internet’s latency towards your ISP (Internet Service Provider).

If you want to check your connection to Discord, you can start by entering a voice channel. As soon as you enter, the bottom pane in the channel list will display your status.

You can mouse over the signal icon beside the “Voice Connected” to view a numerical value of your ping. The bar itself will change according to how your connection status is. The colors are as follows:

The colors in Discord are the usual indicators on how your connection is performing.

Ideally, you want it to have a green indicator. If you happen to have red bars then you will be experiencing severe Discord disconnecting issues.

Orange color can also lead to Discord green but no sound because of latency issues such as RTC Connecting.

Furthermore, you can click on “Voice Connected” to view a more detailed view on your connection status and the server your channel is connected to.

You can try to do manual ping testing to check your packet loss which is the reason why lag spikes or Discord green but no sound problem.

To start with manual ping testing, you can start by accessing the command prompt which can be searched up in your window’s search menu or by using the windows key+R command and typing in cmd.

Running the command attempts to make your computer receive a reply from the server by sending in packets of data.

Lost data is usually called packet loss and several instances of packet loss are responsible for lag spikes or Discord green but no sound-related problems.

It also shows your ping during the process which gives you numerical values that shouldn’t be too far from each other if the ping is stable and not too high if you have a good connection speed.

Failing to satisfy either condition can lead to problems and lag.

Another reason why you might be experiencing Discord green but no sound might be because of bad latency between your channel’s server.

You can check which server your channel is using by viewing it in the detailed panel of your connection status in Discord.

We can see in my previous screenshot that we are connected to the Hong Kong server.

If you might be experiencing poor connections, consider asking an admin to switch the channel’s region settings to something more suitable. To do this simply select the “Edit Channel”.

In this option you can select the region over at the “Region Override” section.

If you have difficulty with finding the right one, you can always set it to automatic and let Discord handle it but if you want to fine tune it, you can select one option that would work for everyone in the server.

Consider using this website to find the best region among your server mates.

In my case we set it to Hong Kong as all of my friends and I had a ping of 5 to 25 when we used the website.

Furthermore, in this section you can change the bitrate of the channel to help those with poor connection.

A value of 64Kbps is standard but lowering it just a bit can help with people with bad internet.

From experience, disabling Quality of Service (QOS) in Discord fixes  any Discord green but no sound problems. It can be viewed in the Voice & Video settings and can be modified there.

I disabled the option as it treats Discord as a high-priority app with your internet which causes it to eat more resources than necessary.

Although this might sound good on paper but can become problematic if your internet can’t keep up with Discord’s demands.

It will also cause other apps on your computer to run slower as Discord will be eating more resources than usual.

This is usually an isolated problem if you happen to share the same ISP with someone and they have no problems at all.

Sometimes you can experience having Discord green but no Sound or poor connection because Discord itself might be blocked locally in your computer. You can check it in the firewall settings.

In the window where you can view all the allowed apps through your firewall. By default, Discord isn’t found here and shouldn’t be blocked. You can manually add it by selecting the “Change Settings” option then clicking on “Allow Another App” and going into Discord’s installation folder. In my case, the Discord application was labeled as Update. If you are looking for the default installation address it should go around the lines of “C:\Users\Username\AppData\Local\Discord” where Username is whatever profile name your PC is set as. My folder looks something like this:

After adding it into the listing, you can tick both boxes for Private or Public connections so that you won’t have to check on it again if you connect to a new connection.

In other cases where Discord is not blocked by your system but by your ISP instead, a VPN would solve most problems. It can also address any Discord green but no sound problems. Some ISPs might block malicious IP addresses and Discord might accidentally connect you to one that might have a similar convention. Furthermore, it can also be blocked by admin restrictions from the service or maybe even local network and traffic. This video from YouTube perfectly describes how a VPN can improve any connection issues such as the Discord green but no sound problem.

Whichever the case might be, using a VPN can bypass any regional restrictions and improve your speed especially if you will be connecting to regions that you have a poor connection with or experience Discord green but no sound related problems. Popular VPN providers such as NordVPN or SurfShark are good options with free options such as TunnelBear and PIA performing just as well. I personally use TunnelBear when I connect to servers that use the EU region although a restart on the application needs to be performed when you decide to turn on a VPN.

If none of the software fixes from above worked, consider rebooting your home’s internet router. You can experience poor connections after a power surge or if your router is overheating. A quick power cycle will fix it and it can be done manually by turning the router on and off through the physical button behind it or by accessing the control panel by typing your ipv4 address which is usually 192.168.1.1.

Most routers should have an option where it can reboot the system wirelessly and it can differ from router to router. If you don’t know where it is, consider googling a manual of your router’s model and ISP.

In my case it was in the Device Management section of my router.

Frequent power cycling when you notice a lapse in connection can help prevent any Discord green but no sound problems. 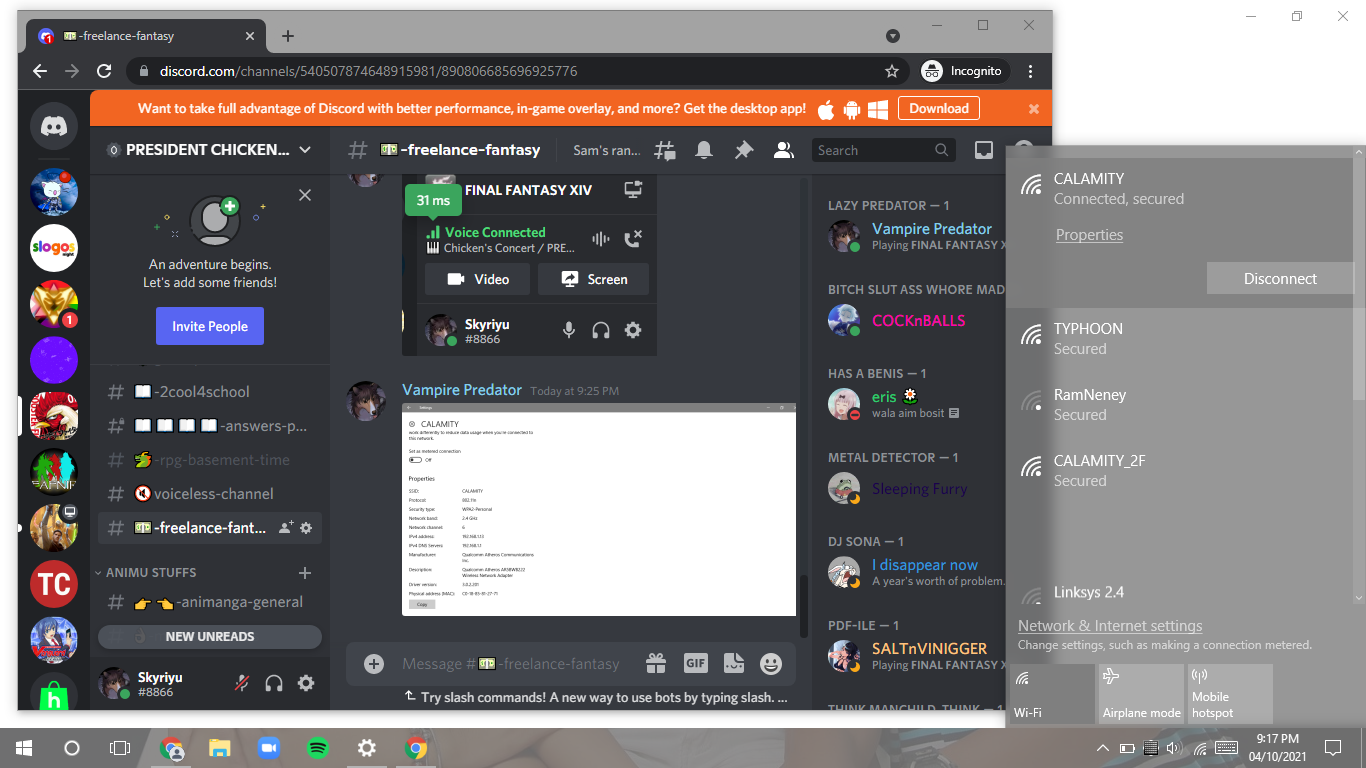 Most modern routers come with 2 frequencies namely 2.4GHz and 5GHz.

Switching over to a 5GHz connection if you are using a Wi-Fi connection might fix any lag or Discord green but no sound problems.

However, it should be noted that even though 5GHz has a faster data speed, it has a smaller coverage which requires you to stay closer to the router.

You can identify what network type you are connected to by clicking on the properties option in your network list.

I also recommend having different names for your connections to establish a difference or label them on the SSID.

In this screenshot here you can see my 2 different Wi-Fi connections with different names.

Use an Ethernet Cable to Identify Wi-fi Interference

I previously mentioned that it is recommended to label your wi-fi connections differently.

This is because it can cause interference with its connection as devices will have a hard time distinguishing between the two and might constantly swap between the two.

Furthermore, if you happen to live in a heavy urban area then other router signals can also cause Wi-Fi interferences as each connection is of the same frequency.

Having too many signals of the same frequency (such as Bluetooth) in one area causes traffic and interference which can cause it to significantly slow down.

I recommend using an ethernet cable in that case as it establishes a direct connection from your router to your device.

It can not only speed up your connection but also make it more stable and prevent any Discord green but no sound problems.

The above methods should help you solve your Discord Lag spikes issue.

The best way to approach lag spikes would be to try out the methods stated above one by one instead of trying them all at once.

This would give you a better chance of pinpointing the issue and fixing it immediately.

8 Ways to Stop your Discord Server from Raids

8 Ways to Stop your Discord Server from Raids

This site participates in the Amazon Services LLC Associates Program, an affiliate advertising program designed to provide a means for sites to earn advertising fees by advertising and linking to Amazon.com.